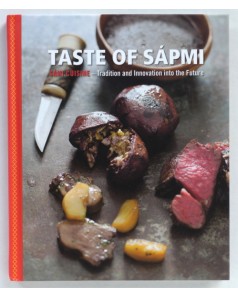 This utterly unique cookbook gives a glimpse of Sámi traditional foods as well as innovative new interpretations of traditional ingredients. Published by Slow Food Sápmi, this book fills a void by sharing the traditional foodways of Lapland.

Introductory chapters briefly describe the berries and plants of Lapland, the basics of reindeer production, and traditional methods of preserving food, such as smoking and salting. A variety of reindeer ingredients and dishes are described in detail. The book incorporates many food words in the Northern Sámi, Southern Sámi and Lule Sámi languages, and includes many interesting recipes accompanied by beautiful photography. While North American readers may find many ingredients difficult to find, the book is invaluable as a fascinating look at Sámi food culture.

Taste of Sápmi was originally published in Swedish, and won Sweden's 2014 Culinary Cookbook of the Year in the "Regional Cookbook" category!