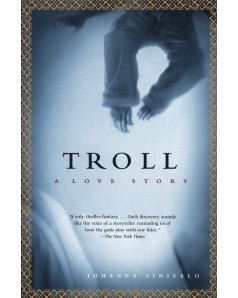 In this Finlandia Prize winning novel, a young, gay photographer rescues a troll from a gang of teenaged bullies and takes him home. As he nurses the troll back to health and bonds with his new pet, his personal life becomes complicated by the troll's wild side and emerging jealousy. Author Johanna Sinisalo deftly mixes ideas from ancient folklore and modern science to create an alternative reality where nature's power over man can become irresistable.

In 2000, Troll - A Love Story became the first fantasy story to win the prestigious Finlandia Prize, and the novel is a central example of "Finnish Weird" literature.

“Johanna Sinisalo has created a strange, beautiful tale, expertly translated, and cinematic enough for movie scenes. . . . Thought-provoking, uniquely imaginative, and brimming with circus-sideshow details. . . Sinisalo’s story ascends to more than just a freakish attraction by being intellectual and darkly comic all at once. The result is simply brilliant.” —Jim Piechota, San Francisco Bay Reporter