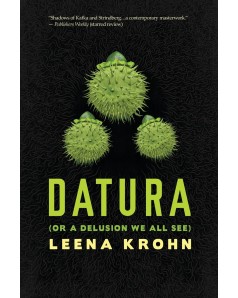 As editor for a paranormal magazine, our narrator is exposed to plenty of strange characters, including a man who detects sounds inaudible to others, a woman who sees Jesus is a piece of cheese, and a self-declared vampire. But strange people and occurences aren't confined only to her work. On her own time, she witnesses mysterious driverless cars moving down the street, seems to travel into the past and chats with a dead acquaintance. As her grasp on reality becomes tenuous, is she being affected by her work, or by the seeds of her hallucinogenic datura plant?

Leena Krohn is a prolific and celebrated contemporary Finnish author, who was awarded the Finlandia Prize in 1992. Her books have been translated into over a dozen languages, and she has been nominated for the World Fantasy Award and International Horror Guild Award.

"[A] parable of elegant chaos. . . Aficionados of the surreal will find this a contemporary masterwork." - Publishers Weekly