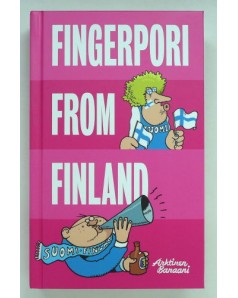 Pertti Jarla's irreverant and wildly popular comic Fingerpori has appeared in Helsingin Sanomat and other Finnish daily newspapers since 2007, and has been published in eight volumes so far. Packed with puns and double meanings, some had thought it could never be translated from the original Finnish, but this volume sets out to prove the critics wrong. The short daily strips feature the foibles of the denizens of Fingerpori along with occasional appearances by Jesus, Nazis, and man trains. Read Fingerpori from Finland to find out what makes hundreds of thousands of Finns groan or laugh out loud every morning.